by LamontPaul, Founder & Publisher
first published: October, 2013
For us kids growing up in the UK's third world, Lou Reed was an escape artist, a personal heroic Houdini

Lou Reed died and maybe the most surprising thing about that is despite his reported somewhere probable love of wheatgrass smoothies and three hours a day of t'ai chi is that he was still alive towards this end of 2013. 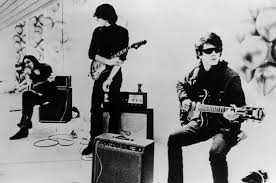 For us kids growing up in the UK's third world, Lou Reed was an escape artist, a personal heroic Houdini, more than just the epitome of the New York Superstar. His band, the Velvet Underground are simply the most influential band in the history of rocknroll. Most every kid in my neighborhood wanted to sound something like them. And thats maybe why so many great bands get built in the UK. That British Velvet filter leads to lots of the off kilter. Great.

I'd always thought of Lou Reed as way more of a writer and a working musician than a mick jagger media star thing. I can recall an interview an age ago around the time of his fantastic New York album where Lou blethered on and on about guitar sounds and probably relative density of different lumps of wood and wire and amplification and his utter dedication to that. Look I know that might be a bit like bumping into a real ale convention type when you just want a lager but the last time I met someone from CAMRA school I was told the number of beer belly men who have afternoon trysts with beer judge people in search of a perfect pint should not be underestimated. Oh wow. I'd never even thought of that. Beer groupies. So I inquired, that's the price of a Beer Belly Boys Bottom these days?

Anyway, with all that talk about wood and wires (and beer and bile) not for the first time Lou Reed really made me think about, not the music I was making, but how I made it and what I made it with. I began to think about sonic sounds and suddenly so many more of those songs I made sounded so much more wonderful than ever.

about LamontPaul »»
For us kids growing up in the UK's third world, Lou Reed was an escape artist, a personal heroic Houdini
The OUTSIDELEFT Weekly Playlist listen on spotify
OUTSIDELEFT SAYS... "SOMETHING MORE TO LOVE!"

Lake looks at a documentary examining the life of the American artist Bill Traylor.

Lorna Rose in the Garden

Our favourite artist Lorna Rose shares some of her lockdown work

Ancient Champion: The Beast of Bearwood

In 1997, photographer Amelia Troubridge went on her first rocknroll tour assignment with... Motorhead

How Many Times with Esther Rose

John Darinelle crafts his finest yet tribute to recognizing the perverse glory that is the self on Heretic Pride.
February 2008

Take it from the Bridge

No Donkeys Were Punched in the Reviewing of This Album

Scott Walker emergers once more from his velvet crypt with The Drift, his weirdest fever dream yet
May 2006

Um, Can We Listen to Some Music Already?

January-ish or so releases including Loyle Carner, Eno, Gillian Welch and more...

Our newest contributor, the somewhat enigmatic Ancient Champion, listens to the Jam and figures, Nothing says "Christmas is Coming" for some middle-aged men more than a remastered collection of punk rock standards...
October 2017