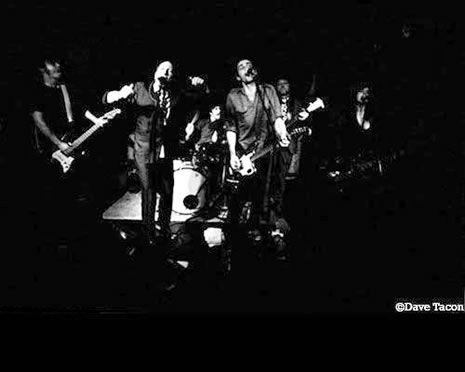 The Howling Dogs from History's Prison

The Drones heap up shovelfuls of grave dirt from Australia's violent past to unearth the most harrowing rock album since "My Funeral, My Trial"

by Alex V. Cook, Music Editor
first published: October, 2006
I may be beating a dead horse with my praise, but The Drones beat that horse back to life, and hitch him to the black wagon of Death, church bells ringing and dogs howling as they rattle past.

Why do we look at car accidents? Why, when we hear the tell tale slurred outburst from a drunk, or that familiar screech from a bar stool before an altercation? It has to be more than the abruptness of it. We turn away, but keep it in our periphery, and not out of any self-preservation aspect, but because secretly, we want to join in. All of us have an ugly side desiring to be drawn into the fray, to go momentarily vigilante. Its why even in death our hands harden into a claw, why we can easily get out front teeth, useful for biting into carrots and cabbage, but our stunted little fangs always remain. And unless you are a hunter, a cop or a sociopath, or Australian, our thirst for the fray lies largely unsatisfied.

The Australians seem to have retained friendliness to the fight. Its roots as a frontier penal colony seem to seep in to nearly every Australian I've ever met. I don't want to characterize them as brawling orges, pulling their Crocodile Dundee knives on surly shopkeeps or disabling old ladies with boomerangs for drunken sport. But in my experience, they are not far from it.

Granted the bulk of my Australian exposure is through its rock stars. Nick Cave gave punk a real taste of southern hemisphere mayhem when he brought the Birthday Party to London. Men at Work seemed a little too butch for the new romantics. Even Michael Hutchense figured out how to go out in amazing flourish that people still whisper about. Gossip coming out of Perth, a city so remote that it is visible from the moon just out of mere contrast, is sparse, so there is no telling whether Gareth Liddiard of the Drones is romaning the desert, drunken on Mad Max bikes, biting the heads of chickens and such, but the bellowed exhortations he exhibits on the exquisite example of rock that Gala Mill is. It wouldn't shock me.

The album starts its mission of saving rock by killing it slowly with a nearly 8-minute dirge "Jezebel" chugging over a ramshackle trail of lost blues and zombie drums. IT immediately reminds me of when I first heard Nick Cave, bellowing about waking up so drunk and full of rage he could hardly speak. "I love you like a violin, I'll hurt you like an amputee. But I'm not going to lose my skin. I'd love to see you again" he bellows against people and hypocrisy and maybe himself. Missiles and Bethlehem and murder enter into this epic tale that begs to be heard. Really, I'm going to force this song on everyone I know. The album could stop after this one song and it'd still make my top 10, but there is more meat on the bone.

"Dog Eared" is a glowing country lope that could be a lost Will Oldham track were it not for the perfect whipcrack rasp of Liddiard's sung-spoken words. "I'm Here Now" keeps the same sleepwalk pace but on a darker edge, with "You've gone from perfect to divine" repeated like a lunatic's chant over its course, gathering tumbleweeds and dementia as it rolls along, like old Phil Collins tracks, except with a feel for the masculine. Ditto for "Words for the Executioner to Alexander Pierce" (a prisoner who escaped thrice from the prison colony only to be captured after eating six men in the process) where things get even more impossibly laden and dark. The shit is delicious. When I talk about Darkness, Racket and Twang in the intro to my book of the title, this record must have leaked out from the future to inspire it.

Saving this record from being a death-row lullaby is the rousing "I Don't Ever want To Change" a howling cowpunk blast from the great 80's/90's of Green on Red and Sixteen Horsepower promises to get a pit forming in the middle of the undead cowboys and whores that are called forth from the loam by this record. "Work for Me" gets the drowsiness back into it, but with female vocals. "I Look Down the Line and Wondered" brings all this under one dark tent, with epic big-sky guitar arcs and his hoarse cry echoing a ragged Neil Young ala Tonight's the Night. I guess I should give in to drunken hyperbole and claim this album to be a raging beast that eats what we thought was bad-ass and then shits out the kind of slop that we are lucky to grow in. Or how about this: I may be beating a dead horse with my praise, but The Drones beat that horse back to life, and hitch him to the black wagon of Death, church bells ringing and dogs howling as they rattle past.

This parade of misery ends with "Sixteen Straws" and almost spoken true tale of a group of catholic prisoners who wanted to die but were forbade by God to kill themselves so they drew straws to equally share the blame. I love when a song is even more overblown than the purple prose I try to foist upon it. This song flays the hide of my praise and makes a sail from it, launching a makeshift raft of acoustic guitars and corpses out into the abyss.

I may be beating a dead horse with my praise, but The Drones beat that horse back to life, and hitch him to the black wagon of Death, church bells ringing and dogs howling as they rattle past.

Top 5 2013 albums by artists I love whose albums I no longer get all that excited about hearing.

I asked my therapist, "Why don't I care about the new National album?"
December 2013

The Art of DMC

The comic book art of Darryl DMC McDaniels, he of seminal rap group Run DMC, comes to the Hang Up Gallery in Stoke Newington. It is to fall in love with at first glance. Epic!
June 2017

On the move Still: The Art of Jesus Raphael Soto

The Museum of Latin American Art, MOLAA, features a founder of the Kinetic Art movement, Jesus Raphael Soto and The Universality of the Immaterial, until March 19th.
February 2006